The Importance of Hard Hats on a Construction Project 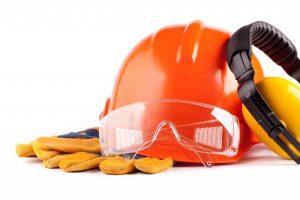 Starting in the early 20th century, hard hats began to be used as a means of worker protection, and they have been a highly important part of construction safety ever since.

Helmets have been used for hundreds of years in various forms for head protection, especially in warfare situations. In fact, prior to 100 years ago, hard hats were exclusively a military symbol. Starting in the early 20th century, hard hats began to be used as a means of worker protection, and they have been a highly important part of construction safety ever since.

In the 1930s workers on the Hoover Dam and Golden Gate Bridge started wearing hard hats as head protection. From there, workers in mines and shipyards started wearing them as well. All of these industries had the potential for head injuries from falling debris and heavy equipment. Since 1974, head protection has become mandatory by OSHA standards for any workers who are at risk of head injury or electrical shocks or burns, or who work in situations where there may be flying debris. Since then, hard hats have become one of the most common type of PPE (personal protective equipment) on any job site.

Hard hats are made up of two parts which work together to protect the head. The shell is the protective outer layer that actually shields the worker from impact and splashes. The suspension is the harness inside the shell, that keeps the shell suspended off the head, so the force of impacts isn’t transmitted to the skull. The harness needs to be snug against the head. There are also various types and classes of the hard hat. Type I protects from falling objects, while Type II protects from lateral blows and objects coming from the sides. Class G is general protection and protects from up to 2,200 volts, while class E is electrical and protects from up to 20,000 volts. Class C stands for conductive and it provides no protection from electrical shock. Choosing the right hard hat type and class is essential for workplace safety.

Hard Hat Care And Use

For hard hats to provide the workplace safety that they need to, you need to care for them and use them correctly. This starts with periodically inspecting your hard hat for defects, cracks, and breakage and inspecting the suspension. It also means wearing them correctly. You should not wear anything else under the hard hat, like a ball cap. You should also not decorate the hard hat or paint on it, since the paint could decrease it’s structural integrity. Finally, remember that the hard hat will wear out over time, so you should be willing to replace them as needed.

G&M Services is proud of our employees and the dedication they have for safety in the workplace. We reward our employees for displaying positive safety practices. We incorporate weekly and monthly discussions and meeting to ensure that all involved are aware of how to handle equipment and potential situations that could occur during a project.

G&M Services offers services in the way of concrete drilling and sawing, concrete scanning, and firestop. To get started with us, call today at 410-787-8828 or visit our contact page. Follow the official company page today on Facebook, Twitter, and LinkedIn.